Spice Up #PorkMonth with Spareribs

Sometimes there’s a desire that takes root so deep in our soul that we can’t let it go. 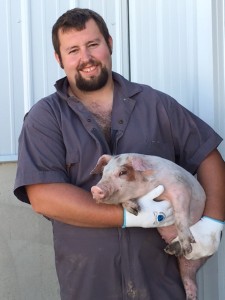 Growing up on a North Iowa farm, EJ Wolter’s family raised crops and sheep. His grandfather was president of the Iowa Quarter Horse Association, so EJ showed sheep and horses in FFA. He also helped a neighbor with his farrow-to-finish operation, which is where EJ discovered his interest in raising pork.

“When a farming partnership that my dad was a part of dissolved in 2000, I honestly didn’t think I’d have a chance to farm,” says EJ. His dad went to work selling Case IH and EJ went to Northwest Iowa Community College in Sheldon for electrical technology.

Upon earning his degree, EJ moved to Omaha and worked for Muth Electric on large-scale commercial projects like wind turbines. He missed country living and found himself spending more and more time driving home for family activities, so EJ moved back to Emmetsburg and went to work for AGP. Because he worked two days and then had two days off, EJ started helping a local gentlemen who had his own electrical business and also farmed. He also started managing a hog site.

Fast forward seven years… EJ and his wife, Katelyn, are proud to be the fourth generation to live on her family’s farm near West Bend. They’re raising their family in the same house where both Katelyn and her dad grew up. EJ and Katelyn are the proud parents of an 18-month-old son, Emmet, and are eagerly awaiting the birth of their second child in January.

EJ and Katelyn grew up just 30 minutes apart and were both active in the FFA, yet they didn’t meet until mutual friends set them up on a blind date. Katelyn was just finishing her nursing degree and had planned to move to Ames. Then she met EJ and he gave her a reason to stay. She accepted a nursing position at Trinity Regional Medical Center in Fort Dodge, and the couple will celebrate their third wedding anniversary this December.

“Eventually, Katelyn would like to join me on the farm,” says EJ. Katelyn’s father still farms the ground around their house, but the plan is that the farming operation will transition to EJ and Katelyn. In the meantime, the young couple is putting their time and energy into their respective careers. 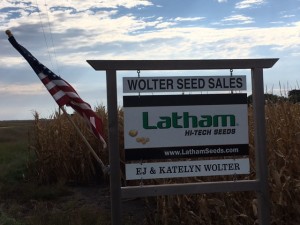 EJ has been managing wean-to-finish sites for the past six years. He’s a contract grower for Smithfield with total production of 27,600 pigs per year. Every 6 to 8 weeks he’s loading out pigs and then disinfecting the buildings for a new group. All the weaned pigs EJ receives come from Oklahoma, Utah, Colorado, Missouri and Illinois.

“My dad made a smoker for my sister Amanda’s wedding,” says EJ, who has two other married sisters, Mindy and Amber. “That really sparked his interest in smoking and barbecuing. He has placed first for both pork loin and ribs at the Wild Rose in Emmetsburg, and he’s won divisions at the Clay County Fair. Now he usually just gets his smoker out to entertain family and friends. It’s become a tradition for him to smoke pork loins on New Year’s Eve.”

In addition to raising pork and serving as a Latham® dealer, EJ is a member of the Iowa Pork Producers Association, the Iowa Soybean Association and the Iowa Farm Bureau. He’s also involved with the Strategy Investment Program (SIP) that advocates for the pork industry.

Tending to hogs at four sites, plus the mowing and snow blowing that goes along with it, doesn’t leave much down time. When he’s not busy working, EJ spends as much time as possible with Emmet and Katelyn. A perfect day off includes taking a day-trip with his family to the Clay County Fair or the Iowa State Fair where they can stroll around and look at exhibits.

In honor of fair foods and barbecue competitions, today EJ is sharing a recipe that’s similar to the one his dad uses to smoke spareribs.

·        2 handfuls of hickory or Applewood chips for smoking, soaking in water and drained

1.      About one hour before cooking, coat both sides of ribs with a little vegetable oil and sprinkle with your favorite BBQ seasoning blend. Set aside at room temperature for 1 hour.

2.      Heat grill for indirect cooking at 230 degrees Fahrenheit to 250 degrees F, using charcoal. Add drained wood chips. Place the rib, meaty side down, over a drip pan and cook for 2 hours.

3.      Add about 12 coals to a charcoal grill every 45 minutes or so to maintain the heat. Remove ribs from grill. Double-wrap each rack in heavy-duty aluminum foil. Return wrapped ribs the grill and cook for 1½ to 3 hours more over indirect heat, until very tender.

4.      Add more coals as needed to maintain temperature for a charcoal grill.

5.      Remove ribs from grill and unwrap. Place ribs over direct heat on grill and brush with BBQ sauce. Cook for about 5 minute until the sauce is set. Turn ribs and repeat with more sauce.