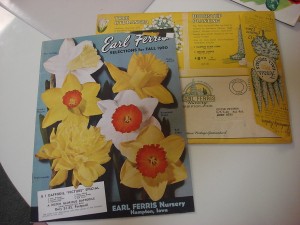 Gardeners know all the best dirt. For generations of gardeners across Iowa and beyond, one of the most trusted sources for high-quality plants, flowers and trees was the Earl Ferris Nursery, a Hampton landmark for nearly 100 years whose legacy lives on.

“Everywhere we go, we see Ferris trees and shrubs,” said Mickey Ferris of Hampton, who ran the Earl Ferris Nursery with her husband, Wayne, for many years. “Some windbreaks are well over 100 years old.”

The roots of the Earl Ferris Nursery run as deep as Iowa’s pioneer heritage. Solomon “Sol” Wayne Ferris started a small nursery in West Branch, Iowa, following in the footsteps of his father, John Ferris. The family moved the nursery to the Butler County town of Bristow in 1869 and established the Bristow Nursery, consisting of about an acre of fruit trees, berry plants and a few evergreens.

The business took off when Sol bought land in the Dakotas and raised horses there. “Traveling through Northwest Iowa to the Dakotas, Sol discovered a good market for trees, especially fruit trees,” says Mickey, an avid historian. “New settlers needed to plant orchards, and they also 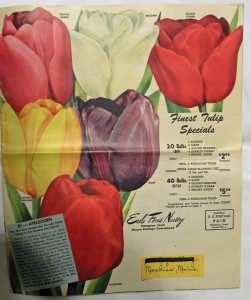 needed evergreens for windbreaks to protect against prairie winds and snow.”

Sol sold and delivered nursery stock by wagon throughout the Midwest. The Ferris nursery became known for its field-grown evergreens, Mickey noted. In the winter of 1899, the Ferris family used sleighs to move their entire nursery stock to Hampton, which offered better railway facilities.

By 1900, Sol’s son, Earl, had graduated from Upper Iowa University and was working for his father. Earl bought a half interest in the family business. In 1902, the ambitious young man became full owner of the company and had big dreams for this small business.

Mail order helped business flourish
While Earl continued to sell nursery stock using agents, in 1905 he pursued a promising new marketing option—mail order. He printed his first catalog in 1907 and changed the name of his growing company in 1912 to the Earl Ferris Nursery Co. By then, the nursery consisted of 360 acres of trees, shrubs, flowers, bulbs and evergreens. 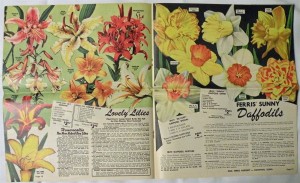 catalogs each spring and sent nearly the same amount each fall. These attractive catalogs contained a full list of the varieties offered by the nursery, complete with prices. “Orders received were prepared for shipment in the ‘pack shed’ and mailed all over the United States, including Alaska,” Mickey said. “At one time, the catalogues represented half of the business at the Hampton post office.”

Since the customer mail-order list was invaluable to the nursery, the list was locked in a large vault in the office every night. Thieves broke into the office one night, Mickey recalled. “They tried to peel the vault door off, assuming there was money in the vault. Then they then tried to enter the vault from the floor above, again without success. The family always wondered what the burglars would have thought, had they been able to get in and found only drawers of names and addresses!” 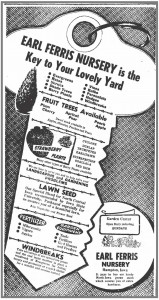 The only son of Earl Ferris, Wayne Sr. was born in Hampton in 1905 and worked in the nursery business all his life. He became president of the Earl Ferris Nursery in 1945 after his father died.

Wayne Sr. also started a retail garden and gift shop in connection with his mail-order nursery. His two sons, Earl and Wayne Jr., came into the business, with Earl serving as office manager and Wayne Jr., in charge of propagation and fields.

Wayne Sr. was a prominent leader in the local community, as well as at the state and national levels. He served as president of the American Association of Nurserymen and Iowa’s state association. He also served as director of the Iowa State Horticultural Society. Closer to home, he was president of the Franklin County Izaak Walton League when the group restored Beeds Lake. Wayne Sr. also served as a member of the Hampton City Council and Park Board and was chairman of the Franklin County Civil Defense program during World War II. 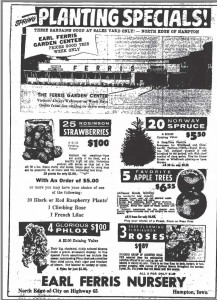 After Wayne Sr. passed away in February 1977 and Wayne Jr.’s brother, Earl, moved to Illinois, Wayne Jr. and Mickey took over the operation of the nursery, which they renamed the Ferris Nursery.

By this era, the once-thriving catalog business dwindled as big retailers like K-Mart and Walmart entered the market. “The stock and land were sold off, and Wayne began growing perennials and annuals in a large glass greenhouse,” said Mickey, who noted that Wayne became well known for his exceptional poinsettias, geraniums and annuals.

Wayne and Mickey’s sons, Jeff, Mark and David, all worked at the nursery during high school. The Ferris’s grandson Chad also worked in the greenhouse and flower shop, becoming the sixth generation to work at the nursery. When Wayne and Mickey decided to retire in 1997, no family members chose to continue the business. After 128 years in business, the nursery was closed permanently.

Now in their 80s, Wayne and Mickey continue to call Hampton home and still enjoy growing plants for their small raised-bed gardens. “It’s a tiny thing, but we love it and
wish we had a greenhouse,” Mickey said. “This part never leaves you.”

For a taste of spring in Iowa, try this flavorful Daffodil Cake, which offers a colorful twist on a traditional angel food cake.

Gently fold the egg yolks into one of the bowls. Spoon yellow and white batters alternately into an ungreased 10-inch by 4-inch tube pan. Gently cut through batters to swirl.

Bake on bottom oven shelf about 40 minutes, or until top springs back when touched lightly. Invert pan on funnel or bottle. Let cake hang until completely cooled. Carefully remove cake from pan to plate.