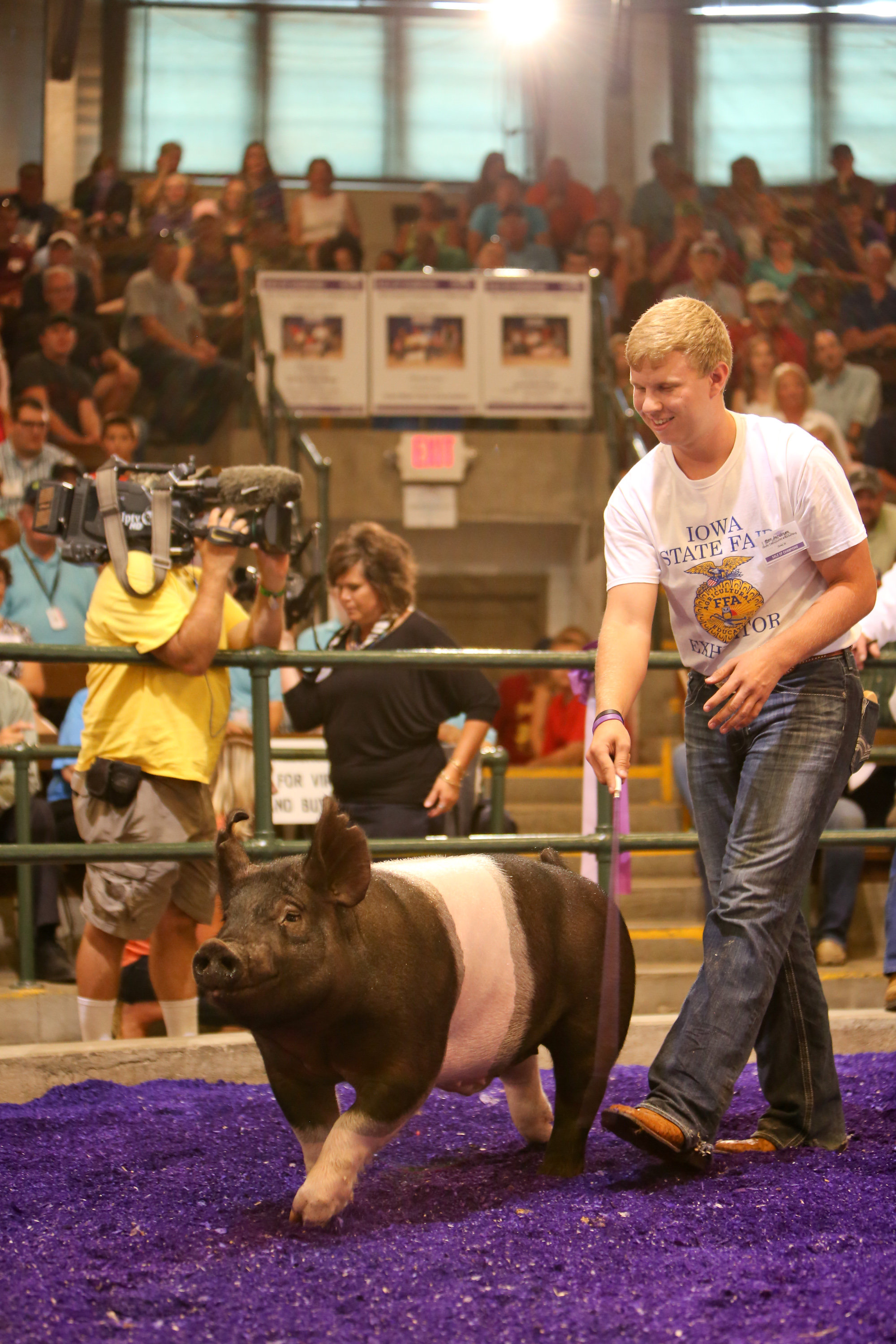 Clarion-Goldfield FFA member Ben Jacobsen parades his grand champion barrow around the ring during the Sale of Champions, which is broadcast on IPTV.

Not only was “Nothing Compares” the theme of the Iowa State Fair, but it describes the feeling Ben Jacobsen of Dows, Iowa, had after his barrow was named the 2015 Champion FFA Market Hog.

“It’s been a long time goal of mine and a dream realized to win Grand Champion Market Hog at the Iowa State Fair,” said Ben Jacobsen, a Clarion-Goldfield FFA member. “Thanks to everyone who helped make it possible!”

Ben raised $14,300 in local support from Latham Hi-Tech Seeds, Woolstock Equipment, Farmers Co-op in Clarion and AgVantage. Hy-Vee purchased the price-winning pork for $29,250 with 25% of the purchase price going toward the Iowa Foundation for Agricultural Advancement (IFAA) program. In fact, Jacobsen received an IFAA scholarship in 2014.

Receiving scholarships and earning the coveted purple banner is proof positive that Ben knows how to work hard both inside and outside the show ring. He enjoys researching sires and dams. He understands the importance of feeding proper diets and working with his hogs. His real leadership passion has been leading county-wide showmanship clinics and sessions on how to select prospect pigs.

While Jacobsen admits that being named 2015 is a great honor, he also hopes that his involvement in the industry helps younger 4-H members – including his two younger brothers – become successful with their projects. Ben’s brothers enjoy showing at the Wright County Fair in addition to World Pork Expo, the Iowa State Fair and Aksarben. They’re also involved in school activities. Matt, a high school freshman, is out for golf. Caleb, a 7th grader, participates in cross country and track.

Their older brother is setting a good example by holding many offices in both FFA and 4-H. Ben continues to exhibit his leadership skills at Iowa State University, where he’s a sophomore majoring in Ag Business and minoring in Animal Science. He is a member of Alpha Gamma Rho (AGR) agricultural fraternity, where he serves as grill master for all charity events, fundraisers and fraternity events. Ben is also general co-chair of the AGR / Block & Bridle Club’s Spring Showdown, a large swine jackpot show held at the Hansen Agricultural Student Learning Center in Ames, Iowa. In addition, Ben is working toward his goal of being a member of the Iowa State Livestock judging team.

Working toward goals and setting stretch goals is a lesson Ben has learned from his parents, Corey and Kim Jacobsen. The couple farms between Dows and Alexander where they also raise corn and soybeans and custom finish hogs. Corey and his parents have been production growers for Latham Seeds since the early 1980s. In 2015, he broke a long-standing seed production record by producing a whole-field yield of 81 bushels per acre.

Soybeans are an important to our livestock industry as 75% of the soybean meal produced in the world is fed to pigs or poultry! Did you know that Iowa farms grow more corn and soybeans, raise more pigs, and produce more eggs than any state in the nation?

In honor of the crops and livestock they produce, today Kim Jacobsen is sharing one of her family’s favorite pork recipes. 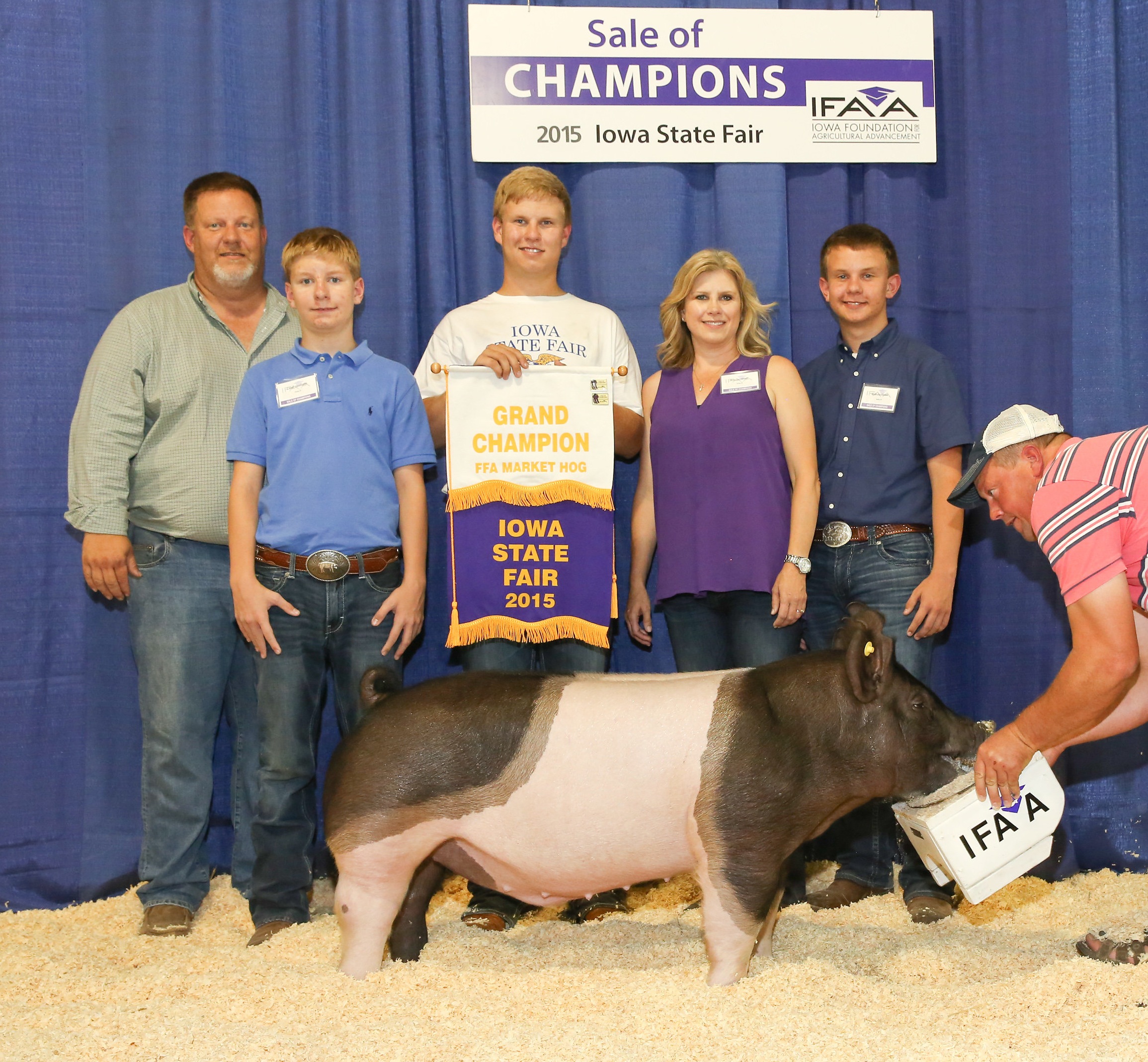 In a large resealable plastic bag, combine the first four ingredients. Add pork chops, one at a time, and toss to coat. Set remaining flour mixture aside. In a large skillet, sauté chops in butter until golden brown; transfer to a greased 9 by 13 inch baking dish.

In the same skillet, sauté the onion, green pepper and mushrooms until tender. Stir in reserved flour mixture; gradually add milk until blended. Bring to a boil; cook and stir for 2 minutes or until thickens. Remove from heat; stir in lemon juice. Pour over chops.

Cover and bake at 350 degrees for 50-60 minutes or until the meat is no longer pink. Serve with potatoes or rice. (This recipe also works great with chicken or bone in chops.)