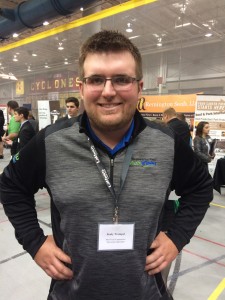 October is both National Pumpkin Month and National Pork Month, so it’s only fitting that we feature Kody Trampel on TheFieldPosition because he produces both! Kody is proud to be to be the sixth generation to farm his family’s land northeast of Klemme, Iowa, in Cerro Gordo County. This year he grew 160 acres of corn and another 5 acres of pumpkins in addition to raising show pigs, which he sells primarily to 4-H and FFA members.

“I really enjoy raising hogs and working with youth,” says Kody, who learned how important mentors can be when he was a member of both 4-H and FFA. He showed pigs and entered his horse in games at the county fair. He also competed in high school rodeo and made it to the High School National Finals in team roping and steer wrestling.

As an intern with MaxYield Cooperative and now as a full-time agronomy specialist with MaxYield Seed, he also understands how important it is for developing young professionals to have good mentors. That’s why he makes it a point to speak to high school classes two or three times each year.

“The anti-ag crowd is becoming more vocal,” says Kody. “Food labels are getting so confusing that even people who were raised on a farm are getting confused! That why I believe it’s more important than ever to do what we can to help prepare students to be great advocates for agriculture. It’s also important that farmers of all ages are able to explain their production practices, be proud of the products they raise and to help educate consumers.”

While attending a barbecue recently, Kody overhead one North Iowa woman say she buys only cage-free eggs because they’re better. Recently a gentleman asked me if my hens are free range because he heard those eggs are fresher. I explained the difference between the two production terms. I also made the point that eggs can’t get any fresher than “farm fresh,” whether the hens are cage-free or free-range.

Pork production can be equally confusing for people not familiar with production agriculture. “One thing consumers need to understand about modern pork production is that the animals benefit from being raised in a climate-controlled facility,” says Kody. “Today’s hog barns are clean. There are fewer problems with disease and health issues. Plus, U.S. pork producers are now able to produce a leaner and more consistent product for consumers.”

Regardless of whether a producer is raising pigs for the meat case or the show ring, Kody says depth and length of body are important characteristics. “You need to raise hogs with correct structure to be successful in the industry. That’s true for seed stock, as well,” he says.

So how did this Iowa livestock producer and seed seller end up growing pumpkins, too? One of his friends was looking to expand his wholesale pumpkin operation but needed more land.

“This was my first year growing pumpkins and I planted 5 acres,” said Kody. “That may not sound like much, but trust me, that’s a lot of pumpkins! It was a huge learning experience. I never imagined how labor-intensive pumpkins would be, but I have to say, I was blessed with good help.”

Kody says one of his all-time favorite meals featuring pork is Specken Decken, a type of German pancake made with bacon or side-pork. His grandmother always makes when the family gathers around Christmas or New Year’s and again around Easter.

Traditionally, Specken Decken is served on New Year’s Eve or New Year’s Day. Recipes vary. Some call for rye graham flour, whole wheat flour or white flour. Some recipe include anise flavoring, raisins and heavy syrup. But regardless of the nuances, these pancakes always feature bits of bacon or sausage and are served with warm maple syrup.