Not many people take up cooking at age 80, but it made perfect sense for Marvin Meyer. There’s just one problem, says this retired farmer, community leader and innovator who lives on the same Sheffield-area farm where he was born in 1925.

“While I like figuring things out, I’d also like to get a good night’s sleep and not always be dreaming about ways to innovate!” said Meyer, 90, who lives in the house he built in 1951 on his family’s Century Farm east of Sheffield.

The ability to figure things out has long defined Meyer, who worked at Sukup Manufacturing in Sheffield for 17 years. “When I started fixing my own meals about 10 years ago, I could hardly boil water,” said Meyer, who began developing his culinary skills after his wife, Anna Mae, moved to a local care center. “I’ve really surprised myself by learning to do all this cooking, which I enjoy.” 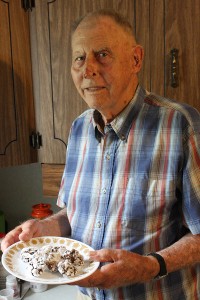 Meyer also enjoys reminiscing when he’s not cooking, tending his garden or baking his famous Chocolate Crinkle Cookies that he takes to the care center when he visits Anna Mae.

“I was always been interested in making things and finding a better way to get jobs done,” said Meyer, who farmed with his older brother, Paul, after graduating from Sheffield High School in 1942.

Years ago Meyer rigged up a small motor, crank, sewing machine belt and tricycle wheel to churn butter. Then there was the time in the mid-1940s when he saw a welder for sale in Popular Mechanics magazine.

“My dad helped me order my own welder, which was shipped by rail to the Sheffield elevator,” recalled Meyer, who used the welder to fix things for the neighbors. “I still have that welder back in the shed. “

Dad traded 60 sheep for a tractor
Innovation is a trait that runs in the family, said Meyer, who recalled how his father, George, purchased a WC Allis Chalmers in 1937, complete with a power lift to raise and lower implements. The tractor, cultivator and plow cost about $1,000 from a local implement dealer, who took in 60 sheep on trade from George to help pay the bill.

A progressive farmer, George was one of the first in his neighborhood to have a single-row corn picker pulled by horses, added Meyer, who can remember when Sheffield boasted an Allis Chalmers dealership, an International Harvester implement store, four filling stations, three banks, four grocery stores, a shoe repair shop, jewelry store and department store.

It was a great day when electricity came to the farm in 1938, Meyer noted. “Some of the first things we got were an electric milking machine, an electric washing machine and an electric motor on the cream separator. Electricity cost $3.50 for 40 kilowatts, and Dad said he didn’t want us to use any more than that.” 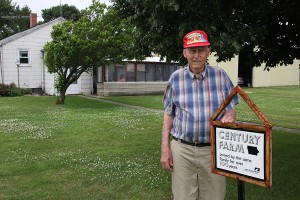 Don’t think too small
Through all the changes he’s seen, Meyer remains connected to the community he’s called home for 90 years.

He served on the board of the ag cooperative in Sheffield for 17 years, including seven years as board president. A few years ago he served as the co-chair of Relay for Life in Sheffield. “I’ve survived colon cancer twice, along with a double bypass,” said Meyer, who has had high blood pressure since he was in high school. “I just keep bouncing back.”

What’s his secret? Don’t think too small, advised Meyer, who continues to dream big and challenge himself. “Life is just plain good.”

Preheat oven to 350 degrees Fahrenheit. Combine oil, chocolate and granulated sugar. Blend in one egg at a time until well mixed. Add vanilla.