Blame it all on her roots. Not only did Melanie (Wagner) Edge show up in boots, but she’s kicking things up a notch, thanks to 4-H, her family’s western store and a new line of custom-designed cowboy boots.

“Our roots are in the western and rural lifestyle, which is the heritage of America,” said Edge, a Franklin County native whose family runs the Western Edge, Ltd. in Humboldt and Ames. “4-H is also an important part of who we are.” 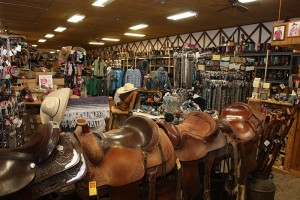 While the Western Edge has long been known for its stylish apparel and hats, along with tack, saddles and more, the business has expanded into custom-designed boots for men, women and children. Edge, her son, Clay, and daughter, Jessica, travel to Dallas, Texas, once or twice a year to work with the Ferrini boot company to create original designs.

“You can get boots at the Western Edge that you can’t get anywhere else in the nation,” said Edge, who has had other companies approach her about designing boots for them, too.

The creativity required to create unique cowboy boots also helps Edge design eye-catching displays in her family’s stores. She credits 4-H with helping her develop this expertise, along with many other life skills, thanks to her involvement in horse and sheep projects, horse judging, home improvement and clothing exhibits and citizenship projects.

“4-H taught me how to become more creative, set goals, work hard and communicate effectively,” said Edge, a former member of the Reeves Rosettes 4-H Club in Franklin County. “I use these skills in all sorts of ways, including reading my own radio commercials that are broadcast on Des Moines radio stations.” 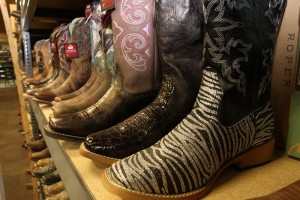 Growing up country
When Edge was growing up on a farm near Hampton in the 1970s, more than 700 kids participated in 4-H throughout Franklin County. “If you were a farm kid, joining 4-H is just what you did,” said Edge, a 1976 graduate of Hampton High School. “It was fun and offered a good way to meet friends.”

Edge also kept busy helping part-time at Wagner’s Western Store, which her grandparents, Glee and Thelma Wagner, ran for decades in Hampton. One of her favorite jobs was selling the store’s merchandise at the Iowa State Fair.

“I’ve worked at the state fair since I was nine years old, and I still love going there,” said Edge, who opened her own western store after graduating from Iowa State University, marrying her husband, David, and starting a family.

The business started in the 1980s in a farmhouse on the Edge family’s property, with tack and saddles displayed on the porch, gift items in the kitchen, boots in the family room, clothing in the dining room, kids’ toys in the bathroom and more merchandise upstairs. “The business was successful and we wanted to help it grow, so we decided to create a destination store,” Edge said. 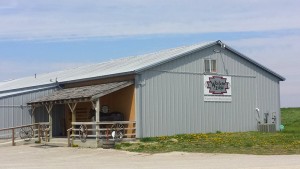 The Edge family built their Western Edge shop southwest of Humboldt. They opened a second store near Ames about 10 years ago. When people walk in either store, they are wowed by the selection of merchandise, along with the big sales. “While I didn’t necessarily dream of running a store, it has been a great opportunity to work with my family and many long-time employees,” Edge said.

Giving back to the community
Edge and her husband also made sure their three children had the opportunity to participate in 4-H as the kids were growing up. Cole, a steer wrestler who competes on the Professional Rodeo Cowboys Association circuit, credits 4-H with teaching him a solid work ethic. Clay appreciated the opportunity to learn responsibility and accurate recordkeeping at a young age. Jessica, who was shy by nature, says 4-H helped her develop her leadership and communication skills.

Today, the next generation of the Edge family is involved in 4-H, since the Edge’s grandson, Kaden, participates in Clover Kids. The Western Edge has also launched a new initiative to help young people succeed in 4-H, FFA and rodeo. Talented youth are encouraged to apply to join the “We Team” and receive discounted merchandise from the Western Edge.

“We know it takes a lot of time and resources to be involved in these programs, so we want to help,” Edge said. “It’s important to give back to the community.”

Farmer’s Delight offers a meal in minutes
Since Edge not only gives back to the community but travels extensively for her business, she relies on fast, easy meals to serve her family when she’s home. Her Farmer’s Delight recipe fits the bill.

Combine all ingredients and place in a casserole dish. Bake at 350 degrees for 50 minutes.