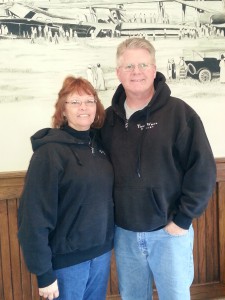 Winemakers and managers of Train Wreck Winery in Algona in front of beautiful mural by Algona art instructor Tong-Uk Yi.

Of course, a winemaker might be a bit biased. But you don’t just have to take Steve’s word for it! Wine enthusiasts from across the world last month voted Gandy Dancer as a top wine at the Consumer Wine Awards in Lodi, California.

Gandy Dancer, a semi-sweet white wine made with Seyval Blanc grapes with notes of pineapple and stone fruit, brought home the bronze from The Consumer Wine Awards showcase. The Gold Medal from this competition also went to Train Wreck Winery for its Orphan Train, a semi-sweet blush wine made from Frontenac Gris (prounced “gree”).

“We’re really breaking new ground within the Iowa wine industry,” explains Steve. “Grapes like Cabernet have been used for thousands of years to make wine. But grapes like Cabernet, Merlot and Chardonnay die at 3°F. That’s why Iowa wineries, including Train Wreck, make wines from hybrid grapes that can grow here. We’re making wine using grapes varieties that are just 5, 10, or 15 years old. As a result, our customers have access to new, exciting wines they can’t get in other regions.”

Just yesterday it was announced that Orphan Train won gold at the World Wine Championships for 2014 Best Iowa Rosé Wine. It earned an “exceptional” rating with 90 points. This wine is described as “aromas of warm apricot compote and buttery pralines with a silky, fruity medium-to-full body and a tangy sour cherry and blood orange accented finish. A delicious, appetizing rosé that dances to its own beat.” If that doesn’t make you want a drum, what will?

Orphan Train also earned a Silver Medal and Caboose earned a Bronze Medal just a few weeks ago during the Finger Lakes International Wine Competition in upstate New York where 75 of the world’s top judges from 20 countries reviewed 3,756 entries.

“Train Wreck Winery has gone up against a lot of well-known and amazing wineries this year at several major competitions,” says Steve. “Competitions are important to us because they provide objective evaluations, and we need that because it’s easy for us to like what we’ve created. It’s more important that our wines appeal to consumers’ palettes.” 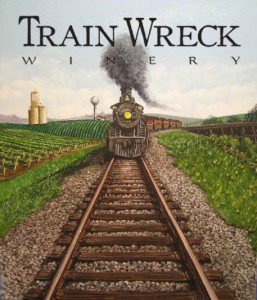 Yesterday I had the pleasure of sitting down with Steve and his wife, Jean, inside their cozy tasting room, which is fittingly located in the historic Chicago North Western Railroad Station in Algona, Iowa. The depot’s original terrazzo flooring and oak woodwork have been restored to their natural brilliance. Algona High School art teacher Tong-Uk Yi painted two murals inside the building, depicting the importance of the early rail lines. Sheila Bennett of Ottosen made beautiful stained-glass windows with a grapevine design.

Although it appears there was a grand plan to theme the vineyard and tasting room around the railroad, Steve says serendipity really played a larger role. Steve’s son-in-law, Dallas Clark, had purchased his family’s Century farm in 2006 and was looking for a way to add value. Dallas researched grapes and planted a 1.5-acre vineyard in 2008. A natural outgrowth of that was to make the grapes into wine. Because the vineyard is adjacent to the site of a famous train wreck on the old Minneapolis-St. Louis Rail Line, they decided to name their winery Train Wreck.

In January 2005, Dallas saw the decrepit state of the old train depot in Algona. Windows were broken and pigeons were nesting inside. He purchased the property and work began to preserve the community’s historical landmark. Meanwhile, thoughts were underway to build a winery on the farm. In early 2011, the family decided to establish the winery – in the interim – at the depot. Finishing touches were made to the structure, and the winery opened December 20, 2011. The depot worked so well that thoughts were abandoned to build a winery in the country.

Growing up on an Iowa family farm certainly helped prepare them for this 24/7 labor of love, say Steve and Jean. Other life experiences helped prepare them, as well. While Steve’s Army Reserve unit was stationed in Germany, he enjoyed small-town wine festivals. It inspired him to begin making his own wine from kits. 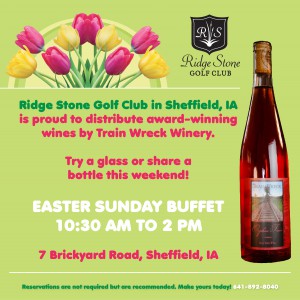 After returning from a tour of duty in Iraq, Steve used the GI bill to take wine making classes at Des Moines Area Community College. He was fortunate that Snus Hill Winery opened its doors to DMACC students, so he was able to gain some real-life tasting room experience there. He also had the opportunity to learn how to care for mature vines from Wilbert and Martha Rittmueller at Lavendar Crest Winery.

Outside the vineyard and winery, the Larsons enjoy spending time with their family. Their oldest son, Eric, is Train Wreck’s distributor for Central Iowa. He and his wife, Becky, have an 18-month old son.  Their youngest son, Jeff, is a deputy for Dallas County. He and his wife, Shaunna, have a six-month-old son. Their daughter, Karen, and Dallas have 2 boys, ages 5 and 3.

When families get together or large groups gather, you can bet the Larson will be serving up Train Wreck. They also host “Sangria Saturday” in the depot.  You also can enjoy sangria from the comfort of your own home, or make a batch to share at  summer picnics. The longer sangria sits, the better it gets! Sangria is easy to make, and it’s even appealing to those who “really aren’t that into wine.” Special thanks to the Larsons for sharing their sangria recipe with us on TheFieldPosition!

NOTE: One advantage of sangria is you can use a variety of wines to make it. If you use a dry red wine like “Cow Catcher,” you’ll need to add sugar to taste.

Sangria is perfect for large holiday gathers or summertime parties. Usually the best sangrias are made ahead, allowed to "marinate" overnight and packed with ice and more fruit before serving. To prevent ice cubes from watering down your sangria, make wine cubes.