Celebrating Ag Traditions and Serving Up Hotdish in North Dakota 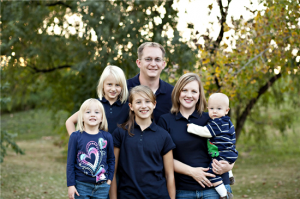 Nick Pyle’s ancestors homesteaded around Casselton, ND, in 1879. Today he and his wife, Brandy, feel blessed to raise the seventh generation prairie farmers here. Their children include: Lily, 13; Brayden, who will soon turn 8; Amelia, 5; and Soren, 3.

Nick Pyle’s ancestors uprooted their families from Canada move to Casselton, about 20 miles west from Fargo in eastern North Dakota.  Other ancestors relocated from Illinois to North Dakota, the land of opportunity. Six generations later, the Pyle’s are still proud to call this area home.

“We’re blessed to have a rich heritage here that steeped in tradition,” says Nick, who lives with his wife, Brandy, and their four children in the farmhouse that members of his family have called home since 1903.  “Even after my working years are through, this place will be special because it holds so much history.”

A love of history and respect for his family and their rural way of life is what led Nick to return to his prairie roots.  He and his cousin Brad are partners a family owned seed business that was started by their grandfather, Donald McIntyre. Donald recognized the need for quality, certified wheat seed, so he built the first of the company’s seed plants in 1966. As the number of seed varieties grew, a second seed plant was built in 1975. As agriculture changed, so did the product lineup and the business structure. 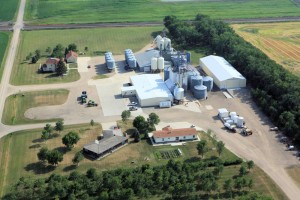 McIntyre-Pyle Seeds, Inc. was formed through a partnership between Donald, his wife Lily; their two children, Duane and Marlyce; and their children’s spouses, Paula and Harvey Pyle.  Then in 1990, a business opportunity with another local seed company led to the formation of Unity Seed Company.  Unity Seed began processing identity preserved food-grade soybeans for both domestic and international markets.

“Our mission is to provide our farmer-customers with the best quality seed available, both domestically and internationally,” says Nick. “We want to help farms survive and prosper here. Because we’re a family-owned company serving family farms, we believe strongly in partnering with family-owned entities.  That’s why we’re excited about our new partnership with Latham Hi-Tech Seeds.”

Latham Hi-Tech Seeds believes in delivering the industry’s best quality seed with the most innovative traits and technologies to farmers in the Upper Midwest.  Like the Latham family members, Nick’s and Brad’s skill sets, interests and experiences complement one another and their business.  Brad grew up working on the production side of the business, so he manages the company’s processing plants. Nick earned a Finance degree in 2001 from the University of Minnesota Carlson School of Business, so he serves as the office manager.  Nick’s dad, Harvey, is preparing for retirement but is still available for counsel.  Dave Morken serves as general manager.

Because family and community are so important to the families here – and to this region – it’s only fitting for the Pyle’s to serve up this recipe for hotdish.  Hotdish is commonly served in North Dakota at family reunions, potlucks and church gatherings.  While there are many various recipes, there dish itself usually consists of three primary ingredients: