If you plan to use a nurse crop when establishing alfalfa in 2017, consider reducing the seeding rate for oats. The trick is to seed enough oats to make a contribution without seeding so heavily that the oats become competition. 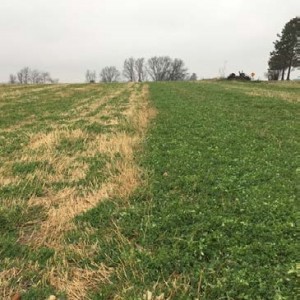 This fall I walked a field of new seeding of LH 9700 alfalfa. The farmer used his traditional oats:alfalfa formula that had produced decades of successful alfalfa crops. The oats established well. Because a few weeds were coming in the headlands, he decided to cut the headlands earlier than the rest of field. The remainder was harvested for grain oats like he had done for decades. However, the results were unlike anything he’d experienced.

Note the stand difference in the picture accompanying this article. It appears the above-average moisture created a greater-than-normal growth response in oats. Unfortunately, the zealous oats caused too much competition and overpowered the fragile alfalfa seedling. The side-by-side demonstration helped us understand what happened in this particular situation.

Oats today have much better germination rates than in years past. As an alternative to adjusting the traditional oats:alfalfa formula, you could seed alfalfa in the fall after you’ve harvested the oat crop. The ultimate goal is to establish a good crop of alfalfa and harvest a good crop of oats.

To learn more about managing alfalfa mixtures, check out this link from the University of Minnesota Extension.