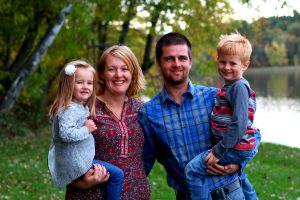 When you think of maple syrup production, chances are you think of New England. You wouldn’t be wrong. However, Wisconsin is the fourth top maple-producing state. Maple syrup is uniquely a North American product due to our climate. Freezing nights and warmer days are required for the sap to flow properly from the trees.

“Syrup is a type of farming. We’re farming trees,” says Latham® dealer Blake Pozarski of Pozarski Family Farms in Boyd, Wisconsin. He grew up on a dairy farm and says there are many similarities between dairying and producing syrup. “I joke with my kids, ‘I’m milking trees today’. When you grow up farming, it’s in your blood.”

Blake grew up on a dairy farm just a mile from where he and his wife, Jessica, are raising their two children. Their son, Wyatt, is six and their daughter, Finley, is four.

“We involve our kids in everything that we possibly can,” says Blake. “My wife and I want our kids to grow up knowing there’s life beyond video games and smartphones. We’re outside as much as possible. Our family time revolves around collecting sap, shed hunting, checking trail cameras and working on food plots.”

Blake’s true passion is managing land for wildlife. He became a dealer for Eagle forage soybeans and Latham® seed corn for food plots; Blake and his dad plant several acres of food plots on their land. The hundreds of acres of woods around his and his parents’ farms offer great cover for wildlife and provide fertile hunting ground for deer and turkey. Those trees also fueled another passion for producing maple syrup.

“My dad and I had talked about tapping trees for years,” says Blake. Then one day my neighbor was helping me do some carpentry work. We got to talking about maple syrup, and I learned that he had tapped trees. Right then and there we decided to do it. That first year we tapped trees the old-fashioned way with brace and bit.” 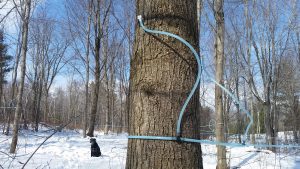 Today the Pozarski’s production process is anything but old-fashioned. Blake explains, “We have tubing run from tree to tree instead of hanging a bag or bucket on the tap.  We use old Surge vacuum pumps along with releasers to bring the sap from the woods into old bulk tanks.  We’re repurposing the old milking pumps and bulk tanks that have been retired from small family farms.  It’s crazy how much of this equipment can be used for both milk and maple syrup.”

“Collecting sap and producing syrup went from a hobby to a business in a short amount of time,” adds Blake. “Maple syrup is like any other business. Once you’re set up, you should maximize the systems in place. Every time you add another system, you must consider the added expense. In our case, we have to consider the cost of equipment and materials before we tap a new section of the woods.”

Like many types of farming, additional regulations go into effect when you reach a certain size. Processors who produce pure maple syrup and concentrated sap are required to have a food processing plant license once their gross receipts are $5,000 per year. This rule prompted the Pozarski family to build for future growth.

Their sugar shack and store was built in 2017.  That same year they also bought a new evaporator, or cooker, which takes the raw sap and boils the water out to make syrup. On average, it takes 40 gallons of sap to produce 1 gallon of pure maple syrup.

“We’ve been fortunate this year as the sugar content is higher, so we’re getting more syrup per tap,” says Blake.

Typically, it’s a four-week season with sap flowing from mid-March to mid-April. This year Blake started tapping on March 18, and he collected sap through April 16.

“When the trees start to bud leaves, the sap quality decreases,” explains Blake. “Many peoples’ yards have soft maples, which produce red flower buds before the leaf bud. We stop collecting sap when the leaf buds turn green because the syrup takes on a different flavor and it isn’t as good. Some larger companies will continue to harvest sap at this point, but it isn’t high quality. This is likely the cheap syrup that you’ll see offered in the supermarket.”

There’s no sure-fire way to predict the quality of a maple syrup season, but Blake believes ample moisture and hotter temperatures last summer are contributing to higher sugar content this spring. Daytime highs and nighttime lows in March and April also contribute to the current syrup production. In addition, research suggests a potential link between the production of maple seed helicopters and the next season’s sap flow.

Seed helicopters, also referred to as whirligigs, tell the story about a tree’s health. An abundance or a scarcity of seedpods reflects what the tree has encountered the previous growing season. Fewer seed helicopters produced in the fall of 2018 would indicate a better maple syrup season in the spring of 2019.

An over-abundance of seed helicopters indicates the tree went through some stress the previous year and is overcompensating through excessive seed production to carry on the species. One stress might be a late frost prevents or rainy weather that makes it difficult for the flying insects to pollinate the maple blooms. On the other hand, an exceptionally good pollinating season the prior year also can make the maple tree take a year hiatus.

In his eight years of producing syrup, Blake has experienced both highs and lows. He says 2012, which was his first season, was the worst ever recorded. That year it warmed up too quickly and too early in the spring. He only had 180 buckets, but that didn’t stop him from tapping trees again the following spring.

“2013 was an insanely good year!” says Blake. “Sap ran like crazy every day for six weeks. The sugar content was great. We averaged 10 gallons a tap and collected 13,000 gallons of sap that year.” 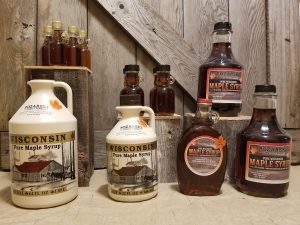 After collecting that much sap by hand, Blake decided he wanted to modernize and expand his operation. In 2015, he and his wife decided to focus on producing their own maple syrup line. Most recently, they’ve focused on grooming their woods to increase production.

“I’m just shy of 2,000 taps this spring. Within the next two to three years, I’m hoping to have 3,000 taps. I’d like to see us be able to direct-sell all of the syrup we produce. Right now, we sell barrels to high-end food companies and gallons to an upscale bakery in Chicago. We have a woman who sells our syrup at four farmers markets by Janesville. My wife also sells our syrup at farmers markets in Chippewa Falls and Eau Claire.”

If you’re interested in trying a jar of the Pozarski’s high quality, pure maple syrup, you can purchase online from their website, Facebook page or Etsy store.

“Sometimes we just need to sit back and appreciate what we have. It’s as simple as that,” says Blake. “In today’s fast-paced society, we sometimes forget just how good we all have it. I think about how much tougher it was for my parents and grandparents. My dad tells a story about getting a loan for $350 to buy a chainsaw and a woodstove, so he could afford to heat the house when he and my mom were first married in 1983. Dad cleaned the dairy barn by hand until he could afford machinery. When you think about how far we’ve all come – whether or not you grew up on a farm – we should be more appreciative of what we have today.”

Take the time to sit down and taste the syrup this weekend!  The Pozarski family is sharing with us one of their favorite recipes for Soft Maple Sugar Cookies.

Below are links to a few of my personal favorite recipes that call for maple syrup. Remember, the most delicious meals happen when you source the best ingredients!

Coming Back from Childhood Cancer, One Step at a Time